Pinning a section of hero loam right before the huck. Dynoing to a gaston while 10 feet above a manky TCU. Maybe even dreading a booty beer after carping and a wet exit in some chunder. Every sport has its lingo, something that separates the pros from the Joes. No one wants to sound like a gumby or a JONG. This list of common terms won’t make a complete noob sound like a grizzled old-timer, and it barely scratches the surface, but it may just help to make sense of what the heck the next table over is talking about.

Here’s a round-up of terms for mountain biking, climbing, and paddling that will help you feel a bit more in the know when you hit the trails, the rock, or the water this summer.

It’s said that Eskimos have 50 words for snow. Well, mountain bikers aren’t too far behind with descriptors for dirt: Loam, hero, tacky, kitty litter, loose-over-hard, the list goes on. Just please don’t say “brown pow.” Here are a few words you might hear thrown around the bike shop.

Berm (noun): A curve with raised sides or banked corners that allow for speed. Every rider’s favorite kind of turn. Example: “These berms are so perfect; you don’t even have to use brakes!”

Gnarly, Techy (adjective): Describes a trail or section of trail that is particularly difficult. The difficulty could be due to steepness, rocks, roots, mud, etc. Example: “That mud is gnarly and the wet roots made it super techy.”

Off-Camber (adjective): The opposite of a berm and a riders’ least-favorite kind of turn where the dirt falls away in the apex so that the outside of the trail is lower than the inside. Example: “Slow down before you hit that off-camber turn or you’ll hit it too fast and launch into the bushes.”

Overcook (verb): Coming into a section of trail or turn with way too much speed. Example: “I overcooked that off-camber section and almost had to bail.”

Pin, Rail, Shred (verb): The act of riding a trail, or section of trail, fast and error-free. The flow is there, the scenery is blurring, being in the zone. Example: “Dude, we pinned that descent!”

In the climbing world, there are many words that are used to describe the shape of the holds. It sounds like a foreign language but is helpful when giving directions from the ground: “Right hand on the potato chip, then reach up and grab the jug handle and put your right foot on the chicken head.”

Beta (noun): Information about the climb. Example: “The key beta on this route is that there is a hidden right handhold after the third bolt.”

Crux (noun): The hardest part of the route. Some climbs may have more than one. Example: “I keep falling at the crux.”

Onsight (verb): To lead a climb on the first attempt without seeing someone climb it or having any beta on the route. Example: “I onsighted my first 5.12 today and didn’t even fall at the crux.”

Flash (verb): Similar to an onsight, except with prior knowledge of the route, either having key beta that helped or seeing someone do the route before you. In the hierarchy of climbing the “best” form of ascent is an onsight, followed by flash, then redpoint. Example: “After watching Jane’s crux beta, I was able to flash the route.”

Redpoint (verb): To finish a climb on lead after being on the route before. Example: “I finally redpointed that route after falling at the crux 100 times.”

Pump(ed)(y) (adjective): The feeling of blood and lactic acid pooling, usually in the forearms, from a climb. Side effects include loss of grip strength and confidence. Examples: “The holds are good, but the steep overhang is pumpy” or “I’m so pumped, I can’t even untie my knot.”

It’s worthy of noting here that if a paddler or mountain biker said they were pumped, they would mean excited or stoked, but a climber? A climber is never pumped to be pumped.

Paddlers have an entire dictionary describing things that go wrong. Chundered, beatered, carnage, and yard sale are all words that mean something bad just happened and someone just took a bath. Here are a few drier terms.

Boof (noun, verb): The ability to keep the nose of the hull pointed up while executing a drop. An onomatopoeia, it comes from the sound the boat makes when slapping the water. Examples: Noun- “That drop requires a good boof if you want to stay dry.” Verb: “Boofing that waterfall means timing your stroke perfectly.”

Rescue Beer/Booty Beer (noun): The hallowed tradition of buying beer for the rescuers of a paddle, boat, or swimmer after a wet exit. If it was a particularly good rescue, the swimmer must pour a beer into their neoprene booty and chug it. Example: “Looks like Dave owes us a rescue beer after we chased his paddle downstream.”

Strainers/Sieves (noun): Respectively, downed trees/brush or groups of rocks that allow water to pass but stops boats. They are dangerous and to be avoided at all costs. Example: “Be careful of the strainers on that outside bend or else you are going to get into a tough situation.”

Carping (verb): Taking a frantic first breath after being underwater for longer than expected.
Example: “I saw you carping as soon as your head popped back above water.”

Combat/Eskimo Roll (noun): Whitewater paddlers would say combat, sea kayakers are more likely to say eskimo. They both mean the same thing, the maneuver used to right a capsized boat while still in it. Example: “The combat roll is one of the most important skills a kayaker can have so you can keep paddling without bailing.”

Regardless of language, there is one thing that all bikers, climbers, and paddlers can agree on: the key to performance is being comfortable, and maintaining your core body temp is an essential part of this. If the body gets too hot or too cold, it’s not going to perform at its best or most efficient, full stop. Technical outdoor clothing using 37.5 Technology helps keep your body at the ideal core temperature of 37.5° Celsius and helps keep the microclimate next to your skin at the ideal relative humidity of 37.5% in any weather. So bring on the summer sun.

Armed with 37.5 gear and a few key phrases, anyone and everyone can be comfortable whether out sending it (whatever “it” is) or talking trash back in the parking lot.

Written by Shaine Smith for Matcha in partnership with 37.5. 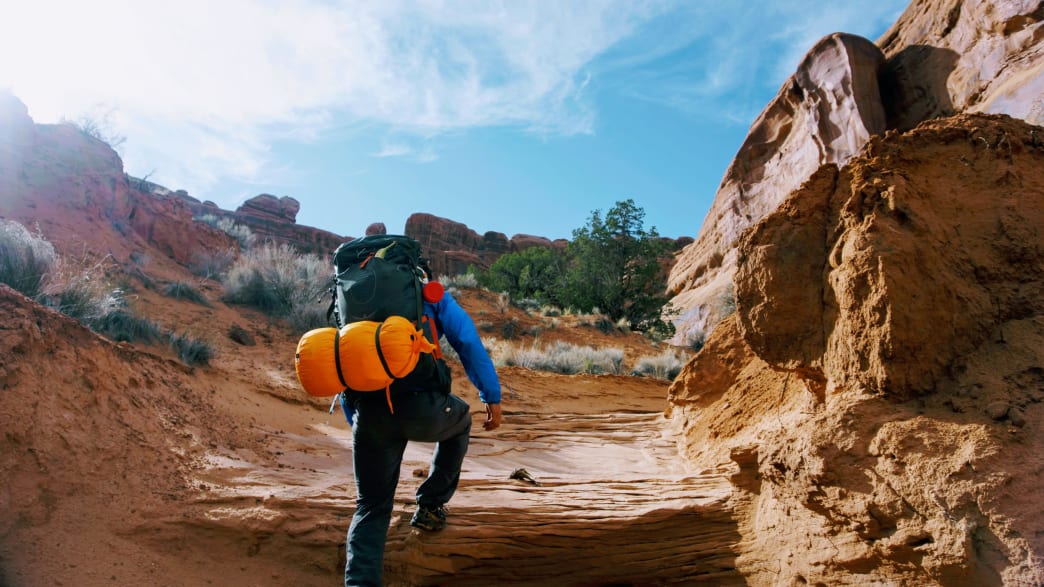 How to Stay Fresh and Clean on Your Next Backpacking Trip

How to Stay Fresh and Clean on Your Next Backpacking Trip