A week has already passed since returning from Bauer World, the annual global retailer meeting held by Bauer Performance Sports Ltd. in Jacksonville, FL. Having recently started the physical transformation those of us in wintery climates go through when Fall arrives and the jackets come out of the closet, it was a shocking transition to be back in the heat and humidity of Florida. However, the 37.5 Technology team sucked it up and bravely marched on to meet the challenge awaiting us at our Omni Amelia Island beachside resort venue. It was very tough, but we persevered.

Our small team, made up of sales and technical support from our lab in Colorado, were invited to help introduce the first 37.5 technology product launch in the world, and to give presentations to more than 600 sales and retailer attendees. To say we were all impressed by what we took part in would not adequately describe the experience. We were not only blown away by the high caliber of creativity and attention to detail shown in the products and presentations, but also by the high level of innovation and intensity in which everyone approached their work. They truly rule the game of hockey and take a lot of pride in their proprietary innovations, like being able to replace the steel on their skates as quickly as the players replace their sticks, as well as new innovations in composite sticks, and new materials in their protective gear. They approached their launch of the new 37.5 technology on-ice and training apparel collections with the same prideful intensity. It was refreshing and exciting. The fifteen hour days were made lighter by the strong sense of camaraderie and confidence within their product teams, the kind of team strength that comes from being passionate about what you do, as well as from having strong leadership. 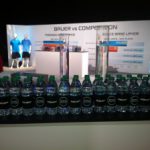 BPS has been on a roll lately with smart acquisitions within the team sport world. All the various sports were represented, however as one would expect from the leading brand in the hockey world, the event kept that hockey feel to it. With that being said, you can probably imagine it wasn’t simply all work and no play, with a beach resort full of hockey players, hockey product engineers, hockey sales people, and hockey retailers. There was that authentic and unpretentious mix of athletes who were working hard during the day and enjoying a cold beer when the day was done.

Our 37.5 technology team, having all grown up in strong hockey cultures with people who matched the characters in the movie Slap Shot, were in very familiar territory. Not only being in a hockey crowd, but being in the midst of free beer and Canadians, we weren’t quite sure of what to expect. At one point when a roar came up from one of the product areas we thought the rumble had begun. Of course we ran toward the roar rather than away from it, and found that it wasn’t an alcohol-fueled riot starting, but merely a hilarious impromptu group product test taking place. The test instruments: a ten-pin bowling ball, various sticks, and pieces of their exclusive G-Form impact protection foam. The method: to drop the bowling ball from the highest point possible on to the various sticks wrapped in the G-Form to see if they could break. Not only did the G-Form wrapper protect the sticks from breaking, at one point the 15-pound ball bounced off the foam like it was fired from a cannon, right through a product display wall. That was the end of the testing session.

Having lived the past couple of decades in the world of technical outdoor and athletic textiles, I’ve seen the gradual transition that has come from corporate acquisitions and the stifling of creativity for increased quarterly earnings. We’re all the same players and we still have a lot of fun, but the earlier sense of adventure, the creativity, and entrepreneurship is now not the same. I’m always asking myself is it us growing older, or is it the acquisitions and consolidation that has changed the spirit of the industry? I’m grateful to BPS for inviting us to attend their meeting, for wanting to do something truly exciting. It gave me a glimpse, a reminder of how the outdoor business used to be. The energy level was high. The inquisitiveness and focus on innovation was keen. They take chances and embrace new technology; making it their own is how they live.

The post on the Wall Street Journal website last week was the first press we’ve seen for our new 37.5 technology brand—thanks to Bauer’s vision and unbeatable team spirit.