Dr. Gregory Haggquist didn’t know a volcanic sand bath would alter the course of his life. As a JSPS Fellow traveling around Japan in 1992, he figured the treatment might relax his mind and body, as they’re intended, but didn’t anticipate much else.

But there, with hot sand and volcanic ash engulfing his body on the island of Kyushu in southern Japan, he stumbled upon the life-changing realization: “It was extremely comfortable,” he says. Rather than overheating, his body adjusted and perspired *just enough *to remain at a comfortable temperature. “I was saying to myself, ‘Wow, it would be really nice if I could have this feeling with clothing I wore.’”

That fateful volcanic sand bath inspired the materials chemist to experiment with placing volcanic ash and active carbon particles into fiber to see how fabric infused with the ingredients might help athletes thermoregulate. Twenty-five years later, 37.5® Technology, as Dr. Haggquist’s breakthrough came to be known, would be used in athletic gear from more than 50 leading brands, including adidas, Under Armour, Carhartt, and more.

Here’s a breakdown of the game-changing technology, a look at the science behind 37.5 technology, and how it helps athletes maintain peak performance and comfort.

37.5 Technology works to keep your body *just *cool enough or *just *warm enough for wherever you are and whatever you’re doing. As Dr. Haggquist explains it, our bodies prefer our core temperature to be at 37.5 degrees Celsius and humidity levels above the skin to be at 37.5 percent—hence the name of the technology.

37.5 technology seeks to regulate the microclimate between your skin and your garments, working to keep the humidity level at 37.5 percent and, in essence, trying to prevent liquid sweat from forming in the first place.

How Does 37.5 Technology Work?

@dhbsport's Aeron Women's Storm Waterproof Jacket featuring 37.5 Technology is a beautiful garment! Awesome to see it at the headquarters in London 😎

Imagine yourself running, hiking, or cycling in a typical, moisture-wicking fabric—one that *doesn’t *use 37.5 technology. As you heat up, it’s designed to pull liquid sweat from your skin and onto the fabric, allowing it to evaporate there.

37.5 technology, on the other hand, works to prevent liquid sweat from pooling in the first place.

According to Dr. Haggquist, the appearance of liquid sweat means your body is producing liquid faster than the liquid can evaporate from the skin pores to cool itself down. It means the one of the mechanisms of cooling—evaporative cooling from our skin pores—hasn’t worked and you’re producing heat faster than you can lose it. “If liquid appears on your skin, that’s an expression of a failure of your body’s ability to cool itself,” he says. “Wicking only kicks on or only starts to work after the system has failed and liquid sweat has appeared. We wanted to address the problem before the system failed, at the vapor level.”

Even in the midst of a workout, you shouldn’t feel too different from how Dr. Haggquist felt in that Japanese sand bath. “We’re trying to prevent you from recognizing that you’re overheated or you’re getting too cold,” he says. “We’re trying to keep you in that comfort zone for a longer period of time.”

37.5 technology seeks to regulate that by using volcanic sand particles embedded with billions of micropores—basically, tiny openings in the material—to expand the surface area of whatever you’re wearing. Your clothes don’t look physically bigger, but the amount of space that moisture can interact with is dramatically increased.

Dr. Haggquist likens this process to the check stand in your neighborhood grocery store: “We have a lot of checkout counters to process all the water molecules,” he says, enabling them to dissipate faster than typical moisture-wicking materials.

Cover your ash! Follow the link in bio to learn how being buried in volcanic ash led to innovation in clothing. 🌋🌋🌋

As your body begins to heat up, those 37.5 particles sense that humidity is increasing and kick into gear. The particles interact with the moisture in the microclimate between the surface of your skin and the clothing layers you’re wearing. This keeps the microclimate humidity low allowing for maximum cooling from evaporation, regulating your temperature and essentially quiets the alarms your body sets off when it overheats.

If moisture *does *begin to build up, the particles accelerate the vapor movement and speed up the evaporation process of converting liquid sweat to vapor, which increases drying rate and helps maintain 37.5 percent humidity.

How Does 37.5 Technology Help Athletes?

Living in Colorado, Dr. Haggquist sums up the dilemma faced by every outdoor athlete: He enjoys hiking in the early morning when it’s cool outside, but the increasing temperatures throughout the day pose *other *garment challenges. “A lot of people always say, ‘layer up and bring extra clothing,’ and that’s because you don’t know what your activity level is or what the temperature will be,” he says. “37.5 basically reduces the number of different types of garments you need. You throw it on, and it adjusts for you.”

We set up a shop at 6,000ft so climbers could get the gear they needed to reach the summit. Our #CliffsideShop equipped these Colorado climbers while we raised awareness and donated money to help climbing organizations.

The same principles can be applied to garments for athletes of all stripes. No matter your workout of choice, chances are good you’ll benefit from a garment that prevents sweat from building up and dries faster than more conventional fabrics.

One recent scientific study would seem to bear that out. In 2016, researchers with theUniversity of Colorado’s Department of Integrative Physiology in Boulder looked the relative efficiency of moisture-wicking T-shirts, cooling vests, and T-shirts using 37.5 technology on cyclists working out for up to 60 minutes.

Researchers found that 37.5 technology performed similarly to the cooling vest (which had been circulating cold water) in terms of regulating body temperature and increased energy efficiency. In other words, study participants wearing 37.5 technology went longer at the same output compared to when they wore a moisture-wicking fabric.

As excited as Dr. Haggquist might be about the study results, he feels the effects of that research every time he hits the trail. “I don’t have to worry about what I’m wearing, because I know I can throw on a limited amount of clothing and know it’s going to work for me, whether warming or cooling.”

Originally written by RootsRated for 37.5. 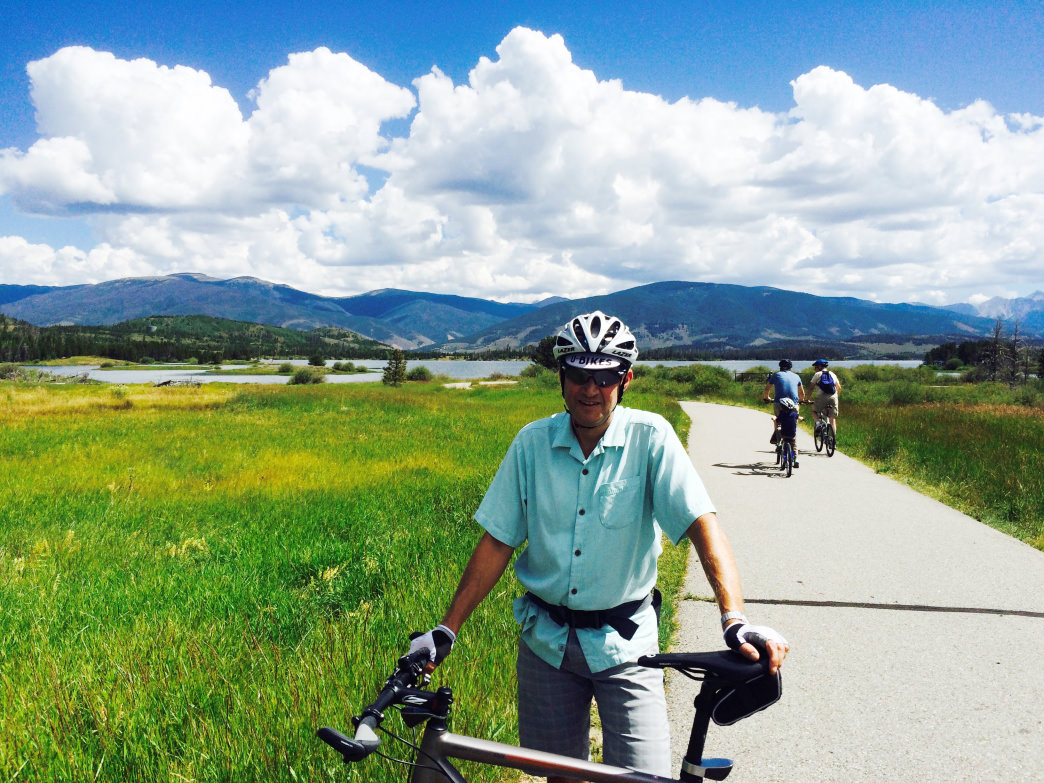